What are you going to ask her? How she's feeling?

God fucking damn it, just go drink yourself to death, you sniggling pervert.

I wish I believed in an afterlife, just so I could imagine opportunistic shitwads like this roasting on a spit in Hell.

I have an idea. Next time Pat loses somebody close to him, let's hang around outside his house, or bar, or wherever it is he lives - and pepper him with personal questions.
Posted by John at 10:45 AM 0 comments 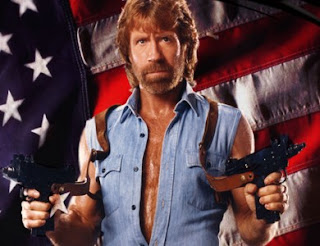 Okay, okay, no surprises here. After all, Chuck Norris endorsed Mike "Hyuk-Hyuk" Huckabee for President. But his latest move is pretty douchey.

Chuck was fine with drafting on the ironic appeal of the "Facts About Chuck Norris" meme, even referencing them in the Huckabee endorsement spot. But now he is moved to that douchiest of pastimes, the character defamation lawsuit.

Apparently fearing that the plainly parodic "The Truth About Chuck Norris" might somehow affect sales of his own boneheaded Christian westerns (?) or confuse the inbred, gun-happy readers of his phlegmatic World Net Daily column, Norris got himself a good Jew lawyer and put the hurt on author Ian Spector and publisher Gotham Books.

Screw you, Chuck. You've said yourself you enjoyed "a huge laugh" at these spurious factoids about you. Nobody with half a brain thinks they're real. Maybe that's what's worrying you - WND readers aren't the sharpest knives in the drawer. They believe whatever they read, even some crazy horseshit about a mean old man who lives in the sky and will kill you if you don't toe the line.

But you can't have it both ways. You've exploited the "Facts About Chuck Norris" in the service of your dickbrained political preferences. Now you want to sue over them? Take a page from Shatner and Hasselhoff, and just learn to enjoy this final, ironic stage of your career.

PS - Huckabee? Really? You're cool with national environmental policy being driven by a guy who thinks the earth is 6,000 years old?