Hillbilly douchebag Mike Huckabee is at it again, "defending the sanctity of marriage" by comparing gay relationships to bestiality, polygamy, obesity and addiction. From the current Esquire:

Huckabee says he doesn't know if homosexuality is inborn, but he believes you can control the behavior. He compares homosexuality to obesity or alcoholism: "Some people have a predisposition to alcoholism. Does that mean they're not responsible for getting drunk? No." 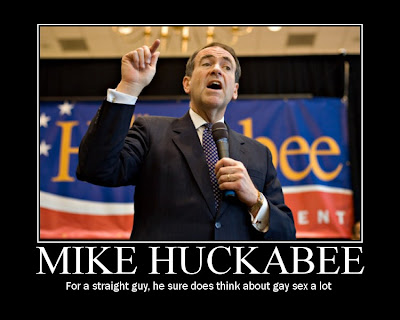 Some people have a predisposition to cousin-fucking, shit-for-brains, know-nothing, jug-band horseshit religious beliefs. Does that mean they should force them on the rest of the country? No. Go blow Jesus and get it over with already, will you Mike?
Posted by John at 4:19 PM