Mr. Yoo, your shipment of STFU has arrived

Short-fingered war criminal John Yoo wrote a clinically delusional op-ed for the Wall Street Journal the other day. Read it if you want, or just skip ahead to the fun parts where smart people take a match to it: 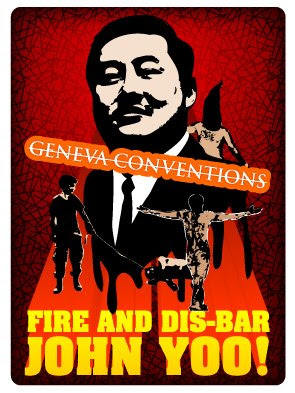 
[I]t's closing time. Yoo doesn’t have to go home but he can’t stay here. The Bush administration is over. It’s like the old high school quarterback who’s the reliving his glory days while he’s fixing your furnace.
Dude. Get out of my house.

And Lisa Alexandrovna, whose name fills me with heady, romantic visions of incense, icons and onion-domed palaces:

The man is a liar, a coward, and now defends his illegal actions by using lies and discredited propaganda to justify the unjustifiable.

That should do it for now. You want more hurt, Yoo? Just keep flapping those DSLs.

[Thanks to Fire John Yoo for the wonderful illo!]
Posted by John at 11:36 AM